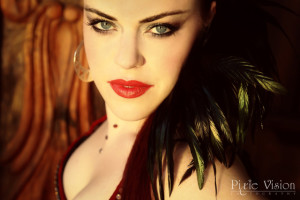 Brenna Crowley is an eclectic belly dance artist, choreographer and instructor in NYC, performing and teaching locally and across the country in many theatrical dance productions, belly dance festivals and other events each year since 2007. She has performed as a featured soloist, as a member of Sera Solstice’s Solstice Ensemble, as part of many collaborations including, Mirapiece Theater, The Pop-Up Project, and companies directed by Dalia Carella, Altagracia and Ayshe. She is the director of her troupe Zilla Dance Ensemble, which was formed in 2009. Since its inception, they have performed in numerous theatrical shows, belly dance festivals and other dance events each year. The dancers that make up this ensemble come from all walks of life and various belly dance disciplines; together they celebrate the exuberance of movement and music.

Rooted in various bellydance styles, her movement is blended with her background and continued training in old way vogue, hip hop, street jazz, contemporary, flamenco and aerial arts. She is known for her fun and imaginative choreographies, intensity, theatricality, commanding stage presence as well emotive performances.

She has been an instructor for over 11 years and has taught at Serena Studios, Solstice Studio, BellyQueen and Ailey Extension, including workshops at other dance festivals and events including Art of the Belly, Raven’s Night and Lumen Obscura. As an instructor, she is known for her concise breakdowns and metaphors, which are always paired with a fun atmosphere and a sweaty good time.

She is part of the dance event production team BrennSelle. With Giselle BellydanceNYC, they have produced and curated themed dance shows on the smaller scale with their Baile Noir soirees and on the larger scale with the annual Witching Hour Boo-tique theatrical dance concert. The events have been highly praised and showcase some of the most talented and creative performers mainly in the Tri-State Area.

She has had the fortune to study under some of the best instructors in the belly dance arena – starting in 2004 first with Diamond Salome and then at Serena Studios with the legendary Serena Wilson, Kelley McKinnon, Zenaide, Layla Mary, Altagracia, Dorit, Rayhana and Najma. In the bellydance fusion world she has primarily trained under Sera Solstice since 2007 and has taken numerous and extensive workshops and intensives with Mira Betz, Zoe Jakes, Mardi Love, Rachel Brice, Amy Sigil, Kami Liddle, Heather Stants and Sarah Johansson Locke.  Brenna continues her movement training with regular classes at Ailey Extension, notably in vogue with Cesar Valentino and hip hop/street jazz with Antonio Jefferson. She is also an amateur SFX makeup artist, mostly self-taught and furthered her knowledge with Continuing Education classes at School of Visual Arts.